A gay soldier calls his father shortly after DADT is repealed.

I don’t care that I’ve already reblogged this

OK, so this really is lovely, and I’ve reblogged it before, but I want to talk about something else for the moment… 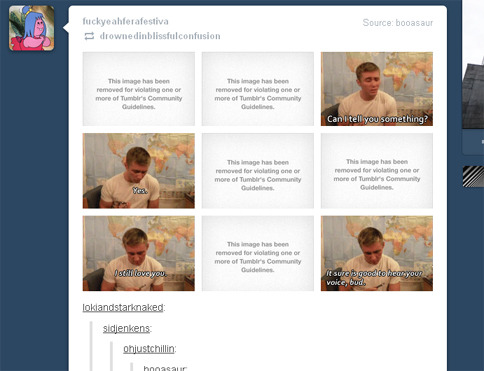 … That’s how it’s appearing to me in my queue, and on my dash when it shows up. This is in both the desktop and the mobile app versions of Tumblr.

(In case the image I’ve uploaded isn’t showing properly, or for the benefit of anyone using a screenreader, five of the nine gifs of the soldier coming out to his father have been replaced with grey boxes which read “This image has been removed for violating one or more of Tumblr’s Community Guidelines".)

There is nothing that could possibly be construed as NSFW in this gifset. There is no nudity, nothing sexual, no curse/swear words. The gifs that have been removed, as far as I can tell, are the ones containing words like “gay".

I suppose, to play devil’s advocate, they might have been removed for violating copyright or some other reason (I can’t think of one), but given that some of them are still there, I can’t see how this could be the case.

Am I missing something here? Maybe this has been done to death, I don’t know. I just wanted to flag this up because this strikes me as quite worrying.

Did someone make this gifset look this way to prove a point or something?
Because I’ve seen the video this is based on and the words don’t even seem to be in the right order (did some of the pictures get removed in this reblog?)
if it was done like this to make a point am I wrong to find it kind of offensive to use this person’s real-life event as a political point?
Cos I really fucking hate it when people do that
(If Tumblr actually is censoring gifs with lgbt content in them, that’s beyond the pale, but I haven’t found any evidence of that nor can I see how that’s even possible to do…)

I want to follow this up, because – somewhat astoundingly – I’ve received a number of accusations of having photoshopped this in order to cause trouble. The above post is an example. Why I would want to do that is beyond me, but there seems to be some doubt.

Here are some pictures of me typing this which I hope will help to set your mind at rest on that issue.

(For crying out loud.) 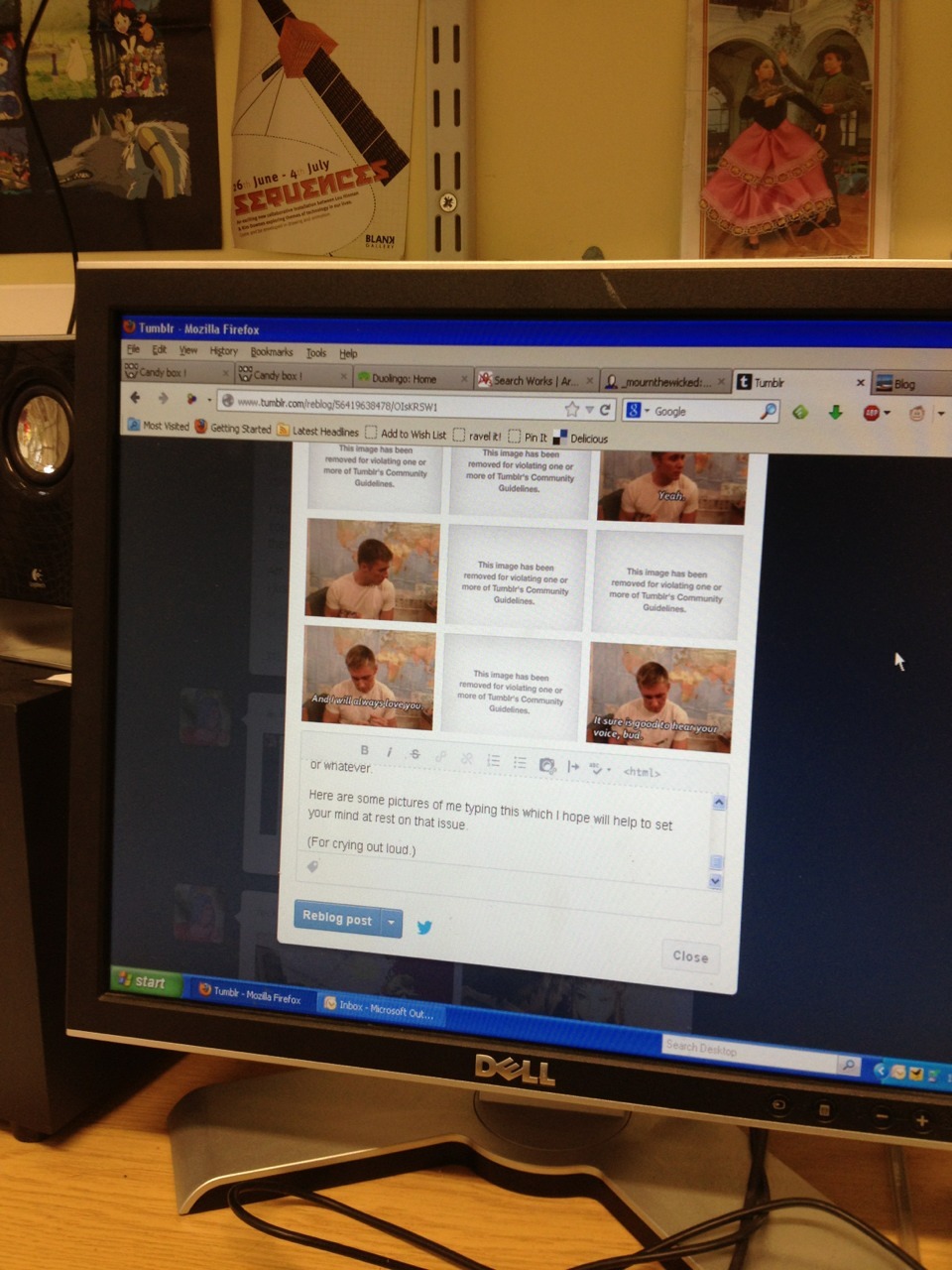 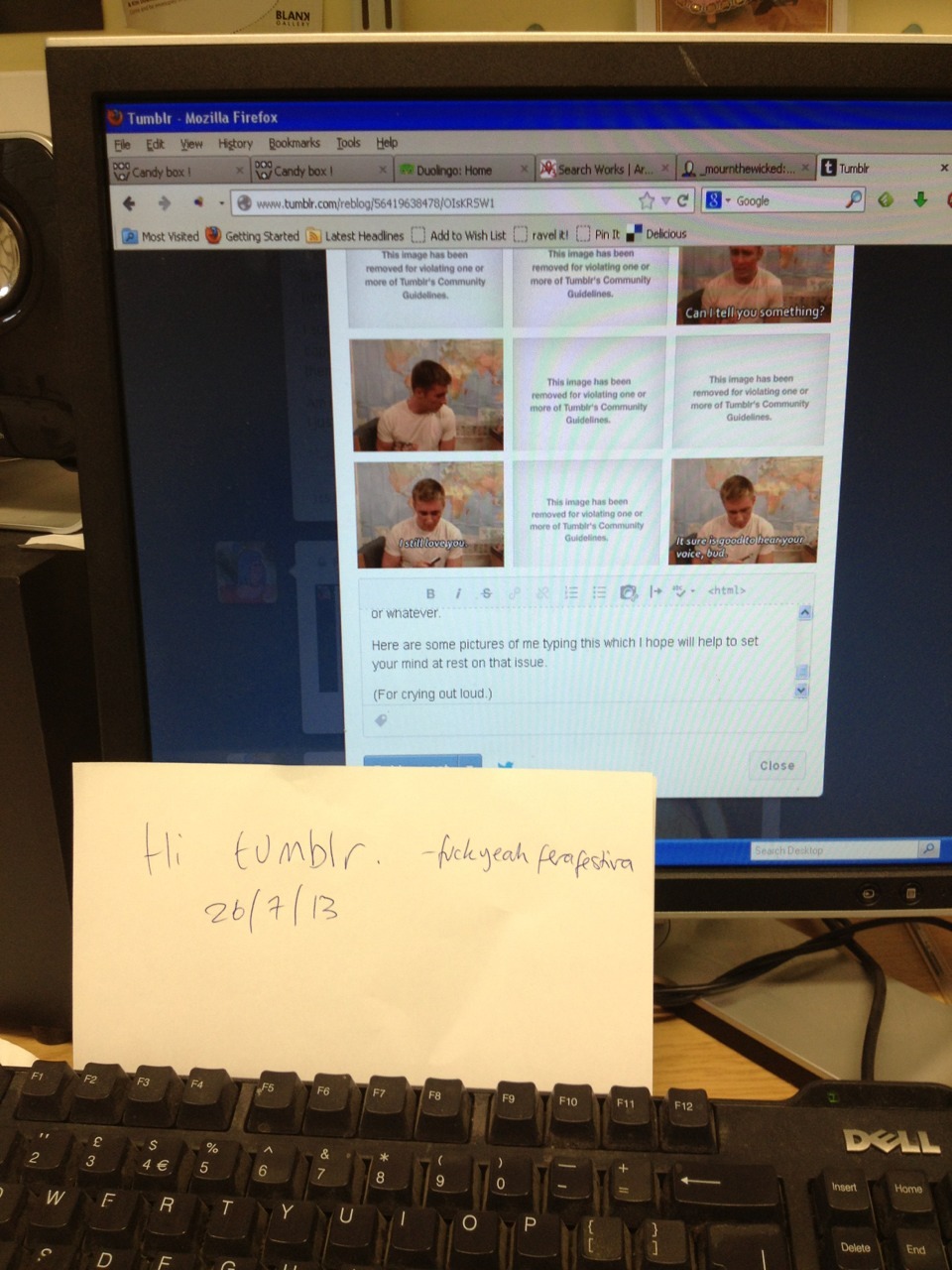 (Yes, it is ridiculous that I would have to prove myself in this way. However, I have already received a number of unpleasant and rude messages, both privately and via reblog, and I’d like to put a stop to this.)

Seriously? People were accusing you of making stuff up? Jeez. How difficult would it have been to simply follow the source and see when it was posted and the kinds of reactions it had received then? (And lol at the person who finds it believable that somebody’d make this post just to prove a point but that Tumblr wouldn’t ever remove the pics.)

A few weeks ago, some of the pics started disappearing, until, by last week, just the one was left. I sent an email to Tumblr support, they replied that they’d look into it, and most of the gifs started reappearing until just one was showing up as removed. Then, within the last couple of days, more started disappearing again, and there was a flurry of posts about the gifs being removed and many people posted about which pics they could and couldn’t see. I sent another email and got another response that they’d look into it, and as of today, I see all the gifs but one, the sixth? I don’t know if it’s different for other people and other reblogs, but I hope that eventually they’ll all show up.