Hi, someone I’m following just reblogged your “I’m fucking proud of my country..” post, and I realized I had no idea what you’re talking about or what this situation is- I know very little about Bangladesh save for it’s location. Since I saw your post I’ve been trying to educated myself on what’s happening, but since it appears this isn’t important to most media outlets and since I’m a little late in following the story, I was hoping you could give me an abridged version? Thanks so much. x

This is going to be my last post on this so here:

After the emancipation of British India from colonialism, India and Pakistan partitioned and became two different countries, yes? Okay, so basically, the map looked like this: 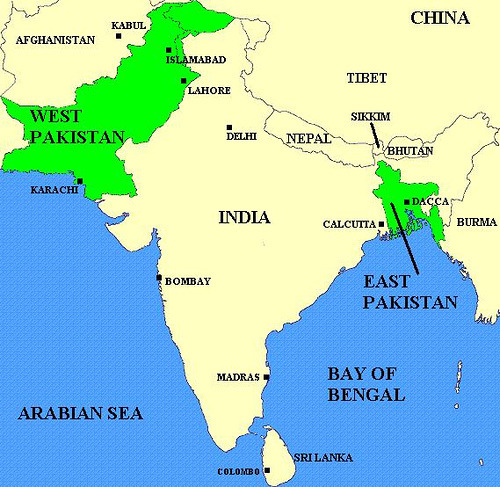 There was also concern for Hindus that lived in Bangladesh as well, as they were considered as dirty unclean people and it slowly became a movement of trying to purify East Pakistan by fitting it into a more Islamic mold. They tried doing this by making the national language of Pakistan Urdu, when most people did not speak it. The school system was made of mostly Urdu speakers who forced the Bengali students to become proper Pakistani students.

There was a major uprising during that time where Bengalis were angry at the Pakistani government for trying to erase their history and language. Islamic leaders at the time (including Ghulam Azam) sided with the Pakistani government as they believed having a unified, Urdu speaking country is the best Islamic nation one can have. There were two major political parties in Pakistan: The Muslim League and the Awami League.

Awami League was led by Ayub Khan in the 1960s who outright stated that the Bangladeshis were like vermin in Pakistan, and they should be eradicated. As Bengali nationalists tried to break away from the party, Awami League soon became a hotbed of Bengali secessionists wanting to part from West Pakistan, and Sheikh Mujibur Rahman (the founding father of Bangladesh) became a leader and drafted a plan that allowed Pakistan to have a more democratic country.

Pakistan had a a democratic election which had a majority of Bengali speaking politicians winning the seats, and West Pakistan denied this and shut down the elections saying that this would break up Pakistan. Okay so basically now there is HUGE unrest and political anger against West Pakistan so the military decided to take this into their own hands:

Operation Searchlight is a planned genocide against Bangladeshis by the US-ian backed Pakistani army (Pakistan was a close ally of USA) and basically targeted specific areas where they slaughtered everyone. My family fled Dhaka to go to rural villages, where they had to hide from the gunfire and absolute carnage. There was also a plan to have a mass rape of Bangladeshi women in order for them to carry Pakistani babies and somehow ‘unify’ the nation once more. Operation Searchlight is one of the biggest genocides after the Holocaust and it is sickening how no one knows about it. To learn more about it, I suggest you look at the archives of the Bangladeshi genocide and IT IS EXTREMELY TRIGGERY SO BE WARNED.

After the genocide, a mass revolt occurred, where thousands upon thousands of untrained civilians got together and started fighting back, and they were met with much success because of their guerilla warfare tactics. After India’s involvement and backing of Bangladesh, the Pakistani army got more resources from the USA and other allies because of India’s supposed communist ties and it basically became a proxy war.

In the end, Bangladesh won out, and it became independent in December 1971. However it is still a corrupt state, and Sheikh Mujibur Rahman was killed along with his family by Bengali betrayers (also known as Rajakars) soon after. His daughter survived this as she was in London, and now she is the Prime Minister.

Now Bangladesh is trying to put war criminals in jail or execute them for the crimes of 1971 but it has a lot of controversy and rightfully so, since it is quite a corrupt judicial government and Sheikh Hasina is willing to put literally anyone in jail if they are anti-Awami League. It’s a mess, but these people don’t know why or how this happened. Ghulam Azam was the leader of the Bengali Jamaat-E-Islami party who sided with Pakistan during the war which is why he is touted as being the symbol of the Pakistani war criminal. It is undeniable that he has advocated for the killing of innocent Bangladeshis.

This is not an abridged version and i’m really sorry for the word vomit, but here it is.

This is really horrifying but interesting to me.

To be clear, we’re not Bengali, and we didn’t face those atrocities, but my mom’s side of the family lived in Bangladesh–or East Pakistan, rather–for a while, and my mother was actually born there. They’d moved there from Hyderabad and left when the violence escalated, fleeing just in time, actually, with their neighbors being killed only a little after they’d left. They went to Iran, then, and only much later moved to Pakistan, not really settling in one place. Everyone’s all scattered now.