I think I’ve finally reached the threshold of terrible lesfic. After years and years of mostly femslash (published and not, because, really, all those ubers), I’m going back to reading books chosen not because of who gets together in the end.

This is going to be fun. 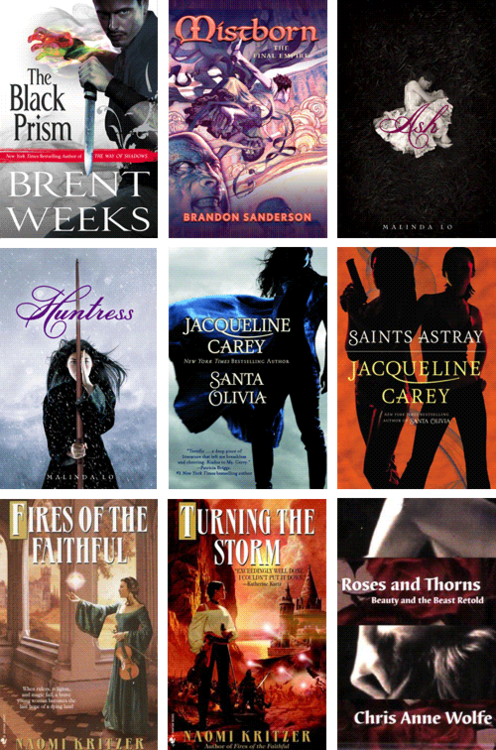 Soooo. Didn’t go exactly as I’d planned. I did finish Mistborn and Black Prism but then also read a bunch of lesfic: Malinda Lo’s Ash and Huntress, Naomi Kritzer’s Eliana series, Jacqueline Carey’s Loup series, and Chris Anne Wolfe’s Roses and Thorns. (Allison Moon’s Lunatic Fringe and Cassandra Duffy’s The Gunfighter and the Gear-Head weren’t quite to my taste.)

I liked them all well enough, though Kritzer was probably the weakest and Carey’s Santa Olivia was probably my favorite.

Ash and Huntress were both good and I don’t think they suffered necessarily from being YA but there was perhaps a certain shallowness in the books that could have been fleshed out. Ash was impersonal and the story and the characters seemed distant, especially the King’s Huntress. She was introduced so late, she almost seemed the weaker point in the love triangle. Huntress had more likable characters but the ending was just bizarre. An entirely unnecessary twist that I can’t really understand, except as a possible setup to a sequel. I liked Ash’s ending better but Huntress was probably technically superior so I’m eagerly looking forward to Lo’s next book.

I very much loved Santa Olivia and don’t really have much beyond what’s already been said by others. And unlike a lot of other readers, I also really enjoyed Saints Astray for what it was. Thinking on it some more, it could have been much better as a sequel and as a book, but it was fluffy fun for me. Pilar is such an unusual but appealing character to root for and Loup could have been boring but never was.

Roses and Thorns, an interesting retelling of Beauty and the Beast where the Beast is called a “perverted and grotesque monster” because of, well, predictable reasons (given what the rest of the books I’ve just mentioned have been). I had been curious to see what how the late Chris Anne Wolfe wrote and I liked this, though it was novella-length only and fairly straightforward.

The Black Prism was fairly awesome in description and I would love to see it. People with the power of different colors and using them in battle would make for a gorgeous HBO/Starz series (or, well, maybe NBC, since there isn’t all that much death or nudity). There are also some interesting, unusual characters and an actually surprising twist.

All I’ll say about Mistborn is that Sanderson is Jordan’s true successor in writing women.